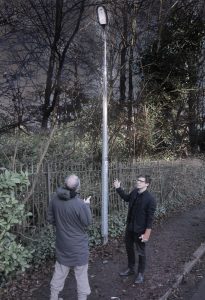 Early last year, despite opposition from Labour, the dominant Conservative group on the county council forced through proposals to dim street lighting by 40% and to switch street lights off in the city between midnight and 6am.

Street lighting is the responsibility of the county council, but the Labour controlled city council was so concerned about city residents’ safety that it agreed to meet part of the cost of keeping the lights on all night. In December, under pressure from other parties, the Tory-dominated county council reversed its decision to switch off and dim the lights, at least for the next few months.

Labour councillors have campaigned hard for adequate street lighting and voted against dimming of the lights. If it had not been for the Labour city council’s offer to the county council, there would have been no overnight street lighting in the city for much of last year.

“It is a basic right that, as residents, we should be able to walk around our city and feel safe. Turning off street lights between 12am and 6am might work in the quiet villages of rural Cambridgeshire but it was entirely inappropriate to suggest this for the streets of Cambridge, where people are often out late at night and in the early morning.”