There was also a strong showing from our other two candidates, with Cameron Holloway finishing in fourth place, just 27 votes shy of being elected, and Hollie Wright not far behind.

Niamh, who also stood in 2019, is a local teacher and education campaigner, and also previously worked in the probation service. She is passionate about education, and promises to continue to fight for better funding for schools in Newnham and across Cambridge.

Another of Niamh’s priorities is cutting traffic, and she has vowed to ‘work towards cutting car use and managing commutes better, improving bus services, reducing pollution and ensuring that a focus on sustainability and biodiversity are at the heart of everything we do.’

Niamh is firmly committed to tackling inequality, for example through supporting new council housing and pushing for local employers to pay the Real Living Wage. 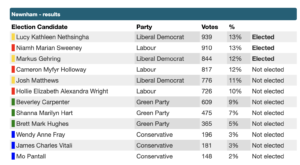 In the Cambridgeshire County Council vote, Tariq Sadiq lost out to Ms Nethsingha by 194 votes.

Newnham Labour’s surprise success was part of an excellent set of elections for Cambridge Labour. On the City Council, Labour increased its majority, with a total of 27 councillors thanks to seats gained in Market, Castle and West Chesterton, while, in the County Council elections, wins in Market and Chesterton saw Labour gain two councillors, taking the total to 9 (all in Cambridge).

Dr. Nik Johnson scored a stunning victory over Conservative incumbent James Palmer in the race to be Mayor of Cambridgeshire and Peterborough, while Nicky Massey cruelly missed out on becoming Police and Crime Commissioner by fewer than 12,000 votes after second preferences were reallocated.

A huge thank you to everyone we spoke to throughout the campaign, and to everyone who voted for us. We look forward to repaying your trust and to continuing to work with and for you.

You can see the full results of all four elections here.