Newnham Labour members joined over a thousand people marching through the streets of Cambridge yesterday as part of a global day of action calling for climate justice, as the COP26 summit reaches its halfway point.

Commenting on the UK government’s poor track record of delivering the urgent change required to tackle the climate crisis, Niamh said: “It was great to be back out marching on the streets of Cambridge for the COP26 Day of Action – so many amazing young people ready to hold this dreadful government to account.”

Newnham Labour campaigner Cameron Holloway, who also attended the march, said: “It was really inspiring to see so many people, of all ages and backgrounds, marching in Cambridge and across the world today to demand action from world leaders. For me, the most important message is that ending fossil fuel extraction and living more sustainably is not about sacrifice; it’s actually about creating a better life for all of us, particularly those who have the least, and are the most affected by climate change.” 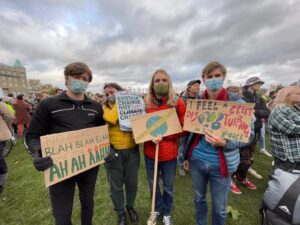 The march was part of a UK-wide day of action organised by the COP26 Coalition to demand urgent action from world leaders at the COP26 summit to limit warming since pre-industrial times to 1.5 degrees and reach zero carbon emissions as soon as possible, as well as calling on rich countries to provide significant grant-based climate finance to Global South countries, as well as reparations for loss and damage in those countries, and debt cancellation to allow proper investment in public services and climate change mitigation.