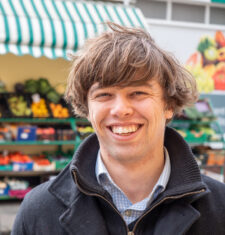 I’m standing as a City Council candidate in Newnham because I care deeply about improving people’s lives.

For many years I have wanted to ‘make a difference’, and I have come to realise that this can be done most successfully through collective action, starting at a local level. We need urgent change to combat inequality, and to tackle the climate and biodiversity emergencies. I believe that Cambridge Labour is ideally placed to fight these battles. I love the opportunity that local politics gives me to listen to so many people’s stories, to hear what they really want for the future of our city, and to play a role in bringing it to fruition.

Many Newnham residents have told me that they are concerned by the proposed development on the West Fields. With Newnham Labour colleagues, I have set up a petition to allow residents to express their opposition to these plans.

While canvassing, I have been hearing that many people are dissatisfied with the condition of roads and pavements in Newnham. I am liaising with Cambridge Living Streets, who campaign on this issue, and I have begun to flag specific problem areas with the County Council. As we emerge from lockdown, the state of our pavements and roads will be an important factor in allowing people across Cambridge to enjoy fresh air, socialising and exercise, while maintaining a safe distance from others. It is also an essential part of the push to reduce car traffic and emissions.

I am also excited to support Cambridge Labour’s environmental plans, including protecting and restoring the River Cam, working towards a herbicide-free Cambridge, and planting trees across the city.

I share residents’ concerns for our local workers, and will support the ongoing campaigns to encourage more employers and colleges to pay the Real Living Wage.

My vision for Cambridge

A Robinson College graduate, and now living just outside Newnham, I am well-placed to represent the concerns of both residents and students in the ward.

I work in prison education, and am passionate about helping our communities’ most disadvantaged people, to make a fairer, safer society for everyone.

Homeless people struggling for survival in the shadow of grandiose buildings: in the seven years I have spent in Cambridge, this has always seemed to me a bitter juxtaposition. I am delighted that the City Council is now offering housing to all rough sleepers, and has already helped over 140 people into longer term accommodation since March 2020. I would love to use my knowledge of working with disadvantaged groups to contribute to this vital work.

Almost everyone who commits crimes has in turn been a victim of social harms;  providing them with the necessary support should be an absolute priority. More concretely, this would involve measures such as: early intervention at schools; work with the County Council to improve the shocking outcomes for looked after children; increased use of gender-specific services for women and girls; and better mental health support.

Cambridge is world-famous as a centre of learning, and I have a particular interest in this area. Before starting my current job in the criminal justice sector, I worked as an editor at a mobile publishing company, and as Translations Manager at an academic press (both in Cambridge). My partner is an academic at the University of Cambridge, so I have a good understanding of the needs of university staff and students.

I love the diversity of, activities, cultures, and languages that thrives in Cambridge. My degree is in German and Russian, and I have also studied some Polish, French and Italian. As a linguist, I am keen to ensure that Cambridge retains and enhances its reputation as a welcoming, internationalist city. This includes opening our arms to some of the world’s most desperate people. I was in Munich during the 2015 refugee crisis, and volunteered regularly at reception centres. The extraordinary response of the German people and my conversations with refugees had a profound effect on me; I am delighted that Cambridge will welcome 200 refugees over the next five years.

Finally, I believe that Cambridge has a real opportunity to become a national leader in tackling the climate and biodiversity crises. The Labour Group has ambitious plans in this area, and I will work to help make them a reality. I share residents’ concerns about protecting and enhancing the green spaces that make Cambridge such a special place to live.

At the same time, we must make sure that this transition does not leave anyone behind, by creating jobs across a variety of sectors, improving public services, and building genuinely affordable housing. As we undergo these changes, I want as many people as possible to be actively engaged in our local democracy. The theme of social justice is something that I want to see running through all the work that we do in Cambridge.