Newnham Labour have been busy with a range of environmental projects in recent months, showing our commitment to tackling the climate and biodiversity crises at a local level. Here are a few of the things we’ve been doing.

Labour campaigner Cameron Holloway, has been speaking with bus users who are unhappy about our local services. One resident, Mary, said: ‘We have no evening bus in Newnham and no bus on Sunday. The No18 along Barton Road is unreliable and runs only once an hour. It is often cancelled or fails to arrive on time.’ Both Cameron and Niamh Sweeney wholeheartedly support the City of Cambridge’s plans to become net zero carbon by 2030. They welcome the council’s replacement of polluting diesel buses and believe that a frequent, reliable bus service is essential to reduce traffic congestion and improve air quality. Local communities should have a strong say in bus routes and the frequency of services run by the big bus operators, Stagecoach and Whippet. Niamh Sweeney and Cameron Holloway are fighting for two buses an hour, a late evening and Sunday service, and the installation of new electronic indicators at the bus stops on Barton Road and Newnham Road. 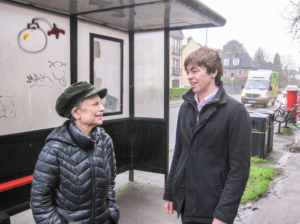 Residents are concerned about Queens College’s plans at Owlstone Croft. The college wants to knock down a newly-built nursery, concrete over parts of the garden and build up against Paradise Nature Reserve. Four new housing blocks are designed to increase student accommodation on a floodplain by 60%. This rides roughshod over the University’s expressed commitment to cut carbon emissions and protect the environment. Residents are worried about the narrow road access and increased traffic and the Friends of Paradise fear major impacts on bats and biodiversity in the nature reserve both during and after construction. Labour City Councillor Niamh Sweeney says: “I am determined to defend local people’s interests and articulate their concerns.”

Your Labour city councillor, Niamh Sweeney, was pleased to support north Newnham residents and members of Adams Road Bird Sanctuary who opposed a proposal to demolish an established home and build two executive houses in its place. Niamh said, “The bird sanctuary is a secret haven for wildlife and deserves protection from over development”. Thanks to Cllr Simon Smith (Castle) who supported Niamh over this issue. 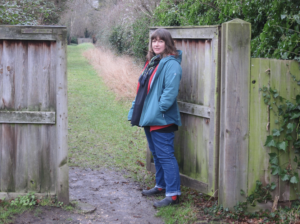 Global biodiversity is suffering decline and extinctions. Cambridge City Council is acting locally. On Lammas Land, it has built an insect bank and log refuges to provide habitats and help rebuild populations. It is planting wildflower patches to promote diversity of insects and plants and supporting a number of similar initiatives by Newnham residents.

Trees help to store carbon, improve air quality, make public spaces more pleasant and contribute to the wellbeing of everyone who lives and works here. The City Council Tree Strategy has brought more new trees to Newnham this year. These include a small orchard along Gough Way as well as many other trees across the ward. 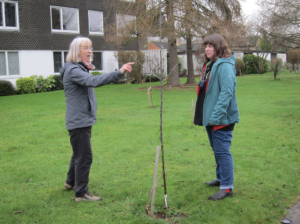